In the history of art, we encounter stories of painters, poets, musicians and sculptors who faced great hardships pursuing their artistic visions and often suffered considerably because of it.

“Never have I found the limits of the photographic potential. Every horizon
upon being reached reveals another beckoning in the distance.”
W. Eugene Smith

This happens less often in the practice of photography.  But if you want a great photographic artist who suffered because of his incredible dedication to creating the kind of work he considered worthy of his efforts, there is no better example than W. Eugene Smith (1918-1978).  He created one of the great bodies of photojournalistic images, was known to go to extreme lengths to achieve the very high standards and goals he set for himself and frequently found himself in contentious relationships with the publishers and art directors at magazines such as Life.

Gene Smith began his career as a teenager shooting photos for local papers in Kansas (as did I, by the way).  He eventually moved to New York City and has hired as a photographer for Newsweek.  But even as a young man he was considered “difficult” – an obsessive perfectionist who seemed to consider his dedication to his art to be far more important than getting along with his bosses and co-workers.

His preference was the use of 35MM cameras, which allowed him to work fast, catch “decisive moments” and be unobtrusive.  Newsweek insisted he use medium format cameras (such as the 2 1/4 Hasselblad) or Rollieflex) so he left that magazine and started shooting for Life in 1939, 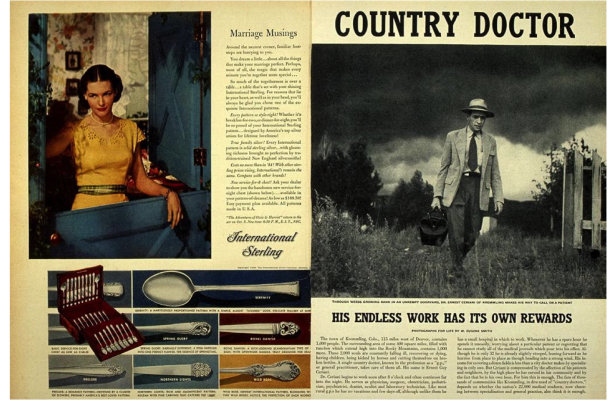 Eugene Smith was extremely driven as a young man and this seems to have only increased during the course of his life and career.  If he had been otherwise, it is extremely unlikely his incredible body of work as a photojournalist and documentarian could ever have been created.

During WWII, Smith was sent by Life to cover the Pacific Theater and for the rest of his life carried memories of being in the midst of horrific battles and photographing dead and wounded military on various Pacific islands as he covered battle after battle.  In 1945, he was wounded by mortar fire covering the invasion of Okinawa.

With his intense approach to shooting photos. Gene Smith took risks more like those of a combat rather than a magazine photojournalist.

W. Gene Smith was introduced to photography by watching his mother shoot family pictures and by the time he was 21 years old had been published in dozens of magazines.  He was always driven, described himself as stubborn, was viewed as a perfectionist and always highly intense.  He wanted to get to the essence, the truth or any photograph.  So when Smith found himself shooting WWII in the Pacific Theater he tried to get as close to the action as possible – shooting the dead and wounded on both sides, and the pain and suffering of children and women among the refugees.

Gene Smith was very much inner-directed and constantly at odds with employers like Life Magazine who paid him to shoot photos.  But he was not a loner, per se.  He had a wife and children and lots of friends.  He would often spend extended periods of time hanging out with and interacting with a variety of different types of people who were his photographic subjects.

But his experiences in the war helped to make an already intense man that much more so. He started to see the “enemy” as human beings and his moral conscience began to strength and emerge.

“The reason I covered the war was that I wanted my pictures to carry some message
against the greed, the stupidity and the intolerances that caused these wars.”
W. Eugene Smith

He brought all these experiences with him after he was wounded on Okinawa and returned home to his family and life in the United States.

“I need to make a photograph that is the opposite of war.”
W. Eugene Smith

W. Eugene Smith was always intense about his photographic work.  And this often put him at odds with the editors and art directors at Life.  They were trying to tell a variety of stores  with limited space in each issue of the magazine.  Smith would come back from an assignment like the country doctor with enough powerful images to fill a book.  There was no way Life could publish more than a fraction of these photos in a story layout.  Although Smith knew this to be the case, his drive to capture the full range of a pictorial story nonetheless made him constantly angry and resentful dealing with his employers.

But he needed somebody to publish his work, and to support him, and Life was the leading publication in the field so he reluctantly kept shooting for the magazine.

After suffering through a lot of what he considered trivial assignments, Smith finally got an opportunity to do something he considered worthwhile when Life sent him to Spain in 1950 to document life under the dictator Francisco Franco. He found a place to stay in a small village that was very poor and whose inhabitants were near starvation – all under the suspicious and watchful eyes of the Gardia Civil who kept asking him why he was mostly making photos of poor people.

Eugene Smith did not create his incredible use of graphic blacks and intense whites by accident.  He was very aware of artists like Rembrandt and others who were masters of chiaroscuro and often strived for the same effects in his BW photographs

Once back from Spain Smith started to print and endlessly preprint his photos – keeping Life waiting and worrying about missed deadlines.  He fueled his efforts with the help of benzedrine and alcohol and pushed himself to the point where a breakdown resulted in his being hospitalized.  Even as he worked to produce great photographs his health, personal and family life and finances continued to suffer.

But Gene Smith then found another subject worthy of his efforts.  He decided to do a photo essay on midwives, which Life also approved, focusing on a woman named Maude Callen whom he met through the the Midwife Clinic in South Carolina in 1951.  In the midst of a racist, segregated south, Smith wanted to tell the story of “a remarkable woman doing a remarkable job in an impossible situation.”

When the story was published it resulted in thousands of dollars being donated to the clinic which funded increased services and allowed for the clinic to move into a new building.  Smith called it “the most rewarding story I have ever done.”

Despite the huge success of this photo essay relations between Life Magazine and Eugene Smith continued to be very difficult.  For an obsessive perfectionist like Smith, the absolutely necessary limitations of a picture magazine were frustratingly limiting.  But needing to make a living and wanting to have his photos published he continued to photograph for the publication.

W. Eugene Smith’s next major project was a photo essay on Albert Schweitzer.  Schweitzer was one of his great hero, he worked hard at getting access and finally found himself in Africa ready to do a picture essay.  But he found Schweitzer to be somewhat vain, very authoritarian and unwilling to allow the photographer to wander about and pick his own subjects to photograph.  But Smith was unwilling to do another shallow “great man” picture story and finally told Schweitzer if he wasn’t able to shoot what he wanted he would leave and Life would get no photographic essay.

One of the most frustrating projects undertaken by W. Eugene Smith was a photo essay on Pittsburg. What was expected of him was 30 or 40 images of various aspects of the city, taking about two weeks time – photos showing steel and coal, the rivers, the railroads and a melting pot population of different ethnic groups.  But Smith seems to have paid little attention to the parameters of his assignment and undertook to capture the essence of the city no matter how much time and effort it took.

In other words, in typical fashion he overdid it – and ended up shooting some 10,000 images!

The results was the photos were never – and could not be – published as he had intended.  He had enough photos to fill a dozen books but there was no way to create a coherent photo essay from all this content that could possibly satisfy his elevated standards. Life tried to put together a layout using some of these images but Smith finally decided to reject all their suggestion and the picture story was never published.

This project exhausted him, was injurious to his health and drained him financially.  He ended up losing his house and ended up almost entirely broke.

But the career of W. Eugene Smith was far from over.  He needed – and found – another subject worthy of his efforts and attention in 1971: Minamata.

Minamata in Japan was a village in which mercury pollution resulting from dumping waste water in the ocean by a major corporation had resulted in terrible health effects afflicting many of the local citizens.  Smith photographed the victims and confrontations between the corporation and protestors.  Smith ended up being attacked by company goons and experienced injuries to his neck and eyesight that would stay with him for the rest of his life.

As in Okinawa, W. Eugene Smith’s commitment to getting close to the action had once again, as it was during his last visit to the island, resulted in considerable physical damage.

Returning from Japan, Smith’s health continued to deteriorate.  In December of 1977 he suffered a massive stroke but partially recovered.  In October of 1978 he suffered another stroke and died.  His talent as a photographer was well-recognized during his lifetime, he worked for Life Magazine and was a member of Magnum Photo, published books and had gallery showings – so he was by most measures very successful.

But his drive, obsessive nature and contentiousness constantly caused him problems and made it difficult for him to get along with those who hired him and paid him for his photographs.  You could certainly say his life would have been happier and his finances would certainly have improved had he not been so difficult.  Certainly, a gifted photojournalist like Sebastian Salgado has been able to travel the world shooting photos of similar significance and intensity without similar problems.

But would a Eugene Smith less difficult have been able to create the awesome body of work he left us with?  That seem doubtful. He was able to photograph as he did because he was who he was.  The personality and talent were interlinked.  The same might be said of many artists in history, from Caravaggio to Van Gogh, whose  personality and behavior were obstacles to success,

But in any event, his work shows what a truly great photographic artist W. Eugene Smith was.  His interest in and ability to tell a picture story in depth was almost unmatched.  His eye for composition and mastery of BW photography, including dramatic chiaroscuro, was superb.  His perfectionism, which often lead him to spend days in the darkroom making prints over and over until he was satisfied, bordered on the incredible.

W. Eugene Smith was a phenomenon – and one of the great photographic artists of all time,